I glanced at the calendar this week and was shocked to realize another month had gone by. I had so many good intentions at the start of summer. I had reading programs lined up, crisp workbooks purchased, prizes to encourage my kids. And then I blinked. And another month was gone. I regretted the lack of teaching I had done. This felt like was a mom fail. The devil loves to do that, to put a tiny doubt in our minds and watch it grow. I began the comparison game and convinced myself all the other moms had been keeping up with their summer goals. I was the only one who hadn’t been diligent with her children’s academic future. Thankfully, before things got too much more dramatic, I decided there was no time like the present to whip out those workbooks and reading logs and start fresh. I knew deep down I wasn’t a failure. And after all, we still have ANOTHER WHOLE MONTH of summer vacation here in California. Plenty of time to accomplish some of the goals I had hoped to. 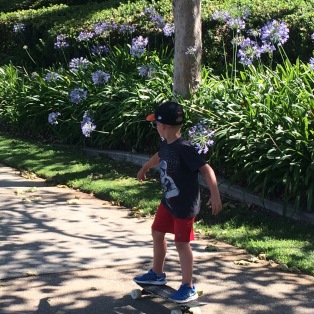 So I decided to cut myself some slack and give myself some grace. There was still plenty of time to teach academics. But when I put things in perspective and saw the other things I have the opportunity to teach, workbooks just didn’t seem that important. I needed to remind myself to be present and realize each day has teachable moments. And thankfully, the learning never stops, even for me.